​Are you thinking of becoming a beekeeper but wondering what the risks are? This is one of the first things that came to mind when I first became interested in beekeeping. So I decided to do some research to find out what dangers might be associated with this fascinating hobby.

Is beekeeping dangerous? Unless you specifically have an allergy to bee stings, beekeeping is not dangerous. Only a small minority of people are allergic to bee stings and fatal reactions are rare. Honey bees are generally not aggressive and if you use good beehive management then stings are unlikely.

Honey bees are docile in nature, and by using correct beekeeping methods and protective measures you can easily avoid any problems. But this doesn’t mean that beekeeping is entirely without risk.

There are a few other things worth keeping in mind if you want to minimize the hazards of beekeeping.

Let’s face it… Bee stings can happen! But if you do get stung it’s usually because you’ve done something wrong, and not because the bees are out to get you.

Many people are afraid of bees in the same way that they fear wasps or yellow jackets. But bees don’t sting for no reason. Bees have barbed stingers which remain lodged in a person's skin when stung. This means that the stinger is ripped from the bee’s abdomen and the bee dies as a result. If you’re stung by a honey bee, it’s a tragic experience for both parties!

Bees that are away from the hive are interested in foraging for nectar and pollen and will rarely sting unless you handle them roughly. However, in certain circumstances honey bees may become aggressive, in particular when they believe that their hive is under threat.

As a beekeeper you should be familiar with the rules of safety about handling bees and managing your beehives throughout the season. You should also have all the necessary protective clothing and equipment.

​If a bee lands on you it’s normally by mistake. It might think you’re a flower if you’re wearing certain bright colors or a particular perfume. Bees have furry legs which can get caught up in hair or clothing. If this happens they may panic and sting. Don’t swat at bees since this will just panic them more. When they realize that you’re not food they will leave. What we might perceive as aggression from bees is in fact defensive behavior when a hive is under stress or attack. In general if bees are overly disturbed and feel to be under attack they will defend themselves.

Also, bees can be moody! Their temperament can change according to environmental factors and the season of the year. One of the best times to visit your bees is on a bright warm afternoon when most of the bees are out foraging. Bad weather conditions can make them irritable. At certain seasons major sources of nectar start to dwindle (This favorable period is known as the honey flow), and hungry bees can get cranky.

There are a few particular circumstances which are likely to render bees more aggressive. I’ve listed some of the main dangers below.

When inspecting or moving around beehives try not to knock them. Vibrations are stressful to bees and they might perceive vibrations as an attack on the colony. For the same reason it’s a good idea to avoid noisy machinery like lawn mowers near your hives. I’ve heard that it can put bees in attack mode!

Stings can cause more bees to attack

If you are stung by a bee it’s possible that other bees will try to attack you as well. Honey bee stings will release pheromones which when detected by other nearby bees will provoke them to attack. If this happens while you’re inspecting a hive it may be a good idea to pause your inspection, reassemble your hive, and leave them in peace. It’s also a good idea to wash your bee suit frequently. It’s said that bees can react badly to an accumulation of venom from bee stings on your suit.

The hive is queenless

The behavior of a hive is largely regulated by the temperament of the queen bee. Queens give off a pheromone (known as queen substance) which gets passed around the hive and which tells other bees that the queen is present and in good health. If for some reason the queen dies, the bees sense this and they can become protective until the queen is replaced.

Stay away from the entrance of the hive

When bees are out foraging there’s a flow of honey bees from a hive entrance. When inspecting hives beekeepers stay to the rear and sides of the hive so as not to antagonise the bees. People approaching the hive from the entrance might be considered as a threat.

Why do bees become aggressive in the fall?

In early fall or late summer bees can become more aggressive for a few different reasons. At this time of the year there may be a drop in available nectar producing flowers, and if the bees can’t find nectar, hungry bees can try to steal it from other hives. When a beehive is attacked by robbers in this way, bees release a pheromone which raises the alarm. Other bees from the hive become aggressive when they pick up this signal. Anyone approaching the hive in this situation would be considered a threat.

Start with the right race of bees

Certain races of bees are naturally more aggressive than others. The domesticated western honey bee (Apis mellifera) is generally extremely docile. It’s best to opt for a gentle race of bees from the beginning, but even then some queen bees may have inherited some African bee genetics making them more feisty than normal. If this is the case it can be a good idea to replace the queen, since the queen’s temperament also has an effect on the rest of the colony.

​​Africanized bees are a more defensive race and they’re becoming more present in many western countries and influence the gene pool of other types of bees.

The myth of swarming bees

A swarm of bees can be an unnerving sight, but a swarm is not necessarily dangerous. Unless you’ve done something to upset a beehive and make them attack you, a bees only swarm when they’re looking for a new home. Swarms of honey bees are docile because they’re only interested in finding a new home. Also, they are drowsy because they have filled up on stocks of honey before leaving their old hive. 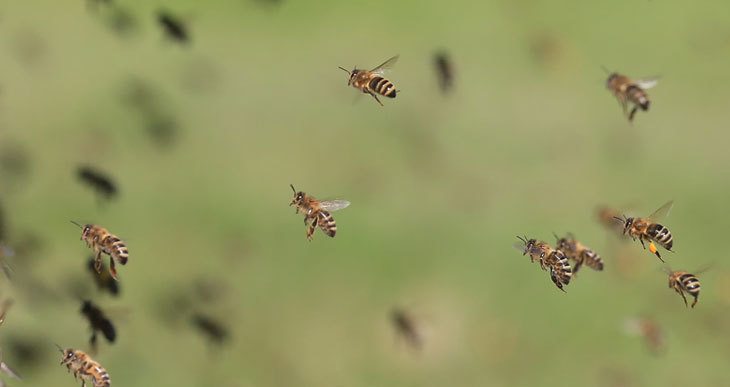 We all have our bad days, and extremes of weather can put bees in a bad mood just like us! The best days to visit your hives is when weather conditions are temperate and it’s probably a good idea to leave your bees alone when the weather isn’t optimal.

Stings aren’t the only hazard beekeepers face. A common problem for beekeepers is suffering from a bad back!

When inspecting hives you spend a lot of time bending down to remove and replace parts of the beehive, and leaning over your open hive to observe the bees at work. All that bending can be torment for your back. Also when harvesting honey you have to lift and carry a lot of weight! Beehives are made up of box parts usually referred to as “supers”. These are the boxes which hold the frames of honeycomb. A medium sized super can weigh between 40 and 50 lb (18 and 23 kg). A large “deep” super when full of honey can weigh 70 to 90 lb (32 to 40 kg)!

To help limit the stress on your back it’s a good idea to place your hives on a hive stand. Lifting the hives off the ground helps avoid the risk of humidity rising into the hive (bees hate the damp), and working on your hives is much easier in this raised position.

Risks with the use of a smoker

Part of a beekeepers equipment is what’s known as a smoker. You’ve probably seen beekeepers using these when inspecting hives. They are used to help calm the bees. Because smokers involve burning some kind of fuel to create smoke they obviously need to be used and stored with caution.

If you want to keep bees in your backyard or garden then the first thing to do is to learn how to manage your beehives and the basics of beekeeping. When you’re around bees, move slowly, stay calm, and treat bees with respect. Remember, there are no bad bees, only bad beekeepers.

Oh… And if you know that you’re highly allergic to bee stings, beekeeping probably isn’t the best occupation for you!

What’s a safe distance from a beehive? When you’re not inspecting hives, safe distance is more of a personal preference than a strict rule. I’ve heard that 30 feet (9 m) is a reasonable distance for observing a hive. It’s a good idea not to stand facing the entrance to the hive where you will be in the bee’s flight path. When locating a hive consider any possible interactions with passersby and take measures to avoid bees mixing with people. I’ve heard that a reasonable distance to site a hive is 10 to 15 yards away from areas of human activity.