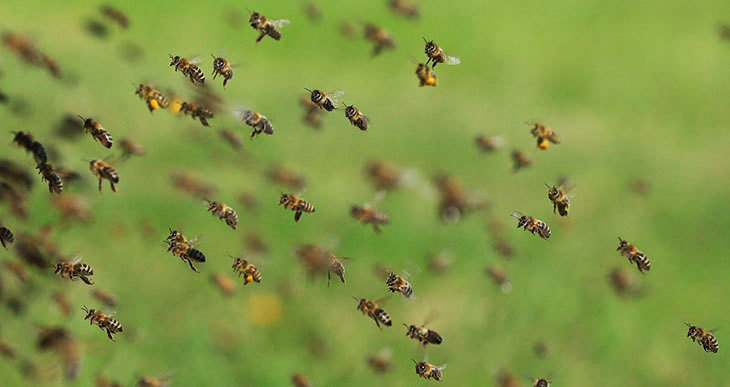 How to Stop Robbing Bees

​A busy bee is a happy bee! When worker bees are out foraging they are pretty single minded - they want food! When nectar is flowing nicely then honey bees are satisfied. But at certain times, food is hard to find. In this kind of situation you can end up with bees robbing other colonies. And this can be a serious problem for weak colonies who can’t defend themselves.

So how do you stop robbing bees? Immediately close up any open hives, then close the entrances of all beehives. You can do this quickly using clumps of grass. Use a smoker to prevent stinging. When the situation calms down, reduce the entrances to all hives. Leave the robbed hive closed for several days and provide feeding to any colonies lacking food stores.

Robbing may very well be the worst thing to happen to one of your colonies. As a beekeeper it’s a good idea to learn why it happens, and how can you anticipate it to prevent it from happening?

What is Hive Robbing and why it Occurs

Robbing is when bees from one colony rob honey from another hive. Hungry bees are looking for honey and nectar, but occasionally, bees may also steal syrup from feeders if they can gain access. A stealing situation can be triggered very quickly. Sometimes, simply by opening a hive for inspection, the odor of honey sends a message to nearby hungry hives, and suddenly you’re surrounded by a lot of buzzing intruders. It may start with just a few bees, but the situation can quickly intensify to a robbing frenzy which needs to be dealt with quickly!

Strong hives are usually the ones doing the stealing. Weak colonies are particularly vulnerable to robbing because they don’t have the numbers to defend against the attack of a larger colony. Stronger, growing colonies also have a lot of mouths to feed, so the incentive to rob is even greater. The delinquent bees can be from one of your own hives, or from a neighboring nest. If you have a small apiary you might even witness bees from multiple hives stealing from each other, while their own hive is being robbed!

Honey bees will fight to the death to defend their honey stores, but inevitably the weaker numbers in a small colony will be quickly overrun. In a severe situation a lot of bees can die during a robbing spree. Not good!

Sometimes, wasps or yellow jackets might even join the brawl, since they’re attracted by the food provided by honey and dead bees! It can get pretty chaotic!

At other moments, robbing may happen very discreetly. You might not even notice.

​It’s interesting to note that the bees who start stealing are usually the older foraging bees, but numbers increase quickly as these bees signal to their own hive to come and join the fray. Bees will continue to rob a hive until its stores are totally emptied. This can happen over a couple of days, or even just a few hours!

Why do Bees Rob?

Robbing behavior occurs whenever nectar sources become scarce. Depending on where you live, at certain times of the year the amount of blooming vegetation diminishes and bees are left with less and less food.

This time of scarcity is known as a nectar dearth. Most notably, a dearth happens at the transition time between seasons, from spring to summer and from summer to autumn. Bees tend to rob in spring before the first nectar flow, and in the fall just after the year’s major nectar flow when large hive populations need feeding. At these times of the year certain species of flowering plants wither, and there’s a gap before new species pick up. Dearths can also happen when temperatures are unusually hot and drought conditions cause blooms to wilt and die. Also, at the end of a season going into winter, there are many different foragers looking for the last remaining nectar sources and scarcity increases.

Beekeepers need to be able to recognize when a dearth happens in their region, enabling them to take precautions.

How to Identify Signs of Robbing

So what are the signs of hive robbing? This activity can be detected with a little observation.

If you see bees fighting near the entrance to a hive or on the landing board, this is a possible indication that the colony is fighting off an attack on their stores. Fighting might also take place near the outer cover at the top of the hive. Try to observe what’s going on. Don’t be fooled by worker bees kicking out the drones in the fall. If you believe that there’s a nectar dearth, and you see a lot of dead bees around the hive entrance, that’s usually a sign of increased fighting. If you observe bees fighting inside the hive that’s a sure sign of trouble.

​Don’t forget that it’s normal to see dead bees near the front of a hive over winter. At this cold time of year worker bees find it difficult to remove dead bees from inside the hive so they just shove them out the door!

Observe the bees coming and going from the hive entrance. Normally, forager bees return to the nest heavily burdened with pollen on their legs. If the bees arriving at the hive aren’t loaded up with pollen, they could be robbers arriving at the scene of the crime! These bees also tend to pause and sway from side to side in front of the hive, looking for the right opportunity to plunge. Again, don’t be fooled by forager bees taking their first orientation flight! These bees tend to leave the hive then turn 180 degrees to face it to learn the hives surroundings. These orientation flights usually occur on warm days without much wind.

Offending bees leaving the hive are heavy and gorged with nectar or honey. This is the opposite behavior of forager bees. They are so weighed down after stealing honey stores that you can sometimes see them take a dip when they launch into flight. Occasionally they even climb up the hive wall before take off to get a little extra height.

If you look near the entrance or the bottom board of the hive and see wax cappings and hive debris scattered around, then this is an indication that stores have been raided. Thieving bees are in a hurry to get in and out with their bounty, so they rip off the wax cappings carelessly.

If you see bees hovering around the back of the hive or exploring cracks in walls, this is suspicious. They may be looking for a sneaky way in to the nest. Check to make sure there are no gaps or openings providing an unwanted entrance. A large number of bees scouting around the outside of a hive is another telltale sign.

Robbing is normally a noisy activity. This may be a little difficult for new beekeepers to discern but it’s another sign that stealing is taking place.

Does it smell of bananas? The alarm pheromone discharged by honey bees when they become defensive is said to have a distinct banana like smell. During the havoc of a big fight with bees defending their stores, alarm pheromone fills the air.

How to Stop Robbing Bees

Bees can get very defensive in a hurry. At the increasing odor of alarm pheromone, bees rush out of the hive looking for the origin of attack. In the confusion, bees start stinging everything all around the hive. More and more defensive bees will join the fray. The situation can become critical if pheromone drifts further and further and rouses other nearby colonies, which in turn become defensive. If you live in a suburban or urban context this is bad news, and your good name as a beekeeper is in jeopardy. A situation like this can cause stinging occurrences in surrounding streets and backyards.

Robbing activity is therefore a danger to both your bees and your neighbors. If you see this in your hives you should take action to stop it quickly. Then you can take preventative measures to ensure it doesn’t continue.

Bees will continue to try to find an opening in the targeted hive, but when they can no longer gain access they will give up. When things have returned to normal you can open an entrance to your hives, but leave the robbed hive closed. You need to give this colony time to regain strength for several days or longer.

How to Anticipate Robbing

Robbing is more likely to occur at certain times of the year or under particular circumstances. It is less likely to occur when abundant nectar sources are available within foraging range of a hive. So during a nectar flow (otherwise known as a honey flow), bees don’t tend to rob other colonies. Food is easily obtained, so they have no need to seek alternatives.

Getting to understand the nectar flow in your locality is one of the best ways to anticipate looting. If you can recognize the signs of a nectar dearth and you understand what time of the year they are likely, then you’ll be well placed to take measures.

​Apparently Italian bees are more prone to robbing than other species of honey bees. These are also one of the most popular breeds used by beekeepers. If you notice that your bees suddenly become more defensive towards you, when usually they are docile, this may be a sign that food is lacking and foragers are starting to have problems.

How to Prevent Hive Robbing

Another reason to avoid robbing is because it can spread disease. During a robbing spree there’s a large amount of bee drift from one hive to another. This movement of bees between colonies can transfer disease or pests from nest to nest.

Keep an eye on your weaker colonies during the more difficult times of the year and make sure none your colonies are going hungry, otherwise at the slightest odor of honey you might get an unpleasant surprise!